RuneWild is an OSRS based Spawn PK Server

What divides us from the others?
Daily Tournaments are held consisting of Hybrid, NH, F2P and other skill tournaments with the winner receiving 100M OSRS+.
RuneWild will be very interactive throughout your gameplay experience, we will be doing this through livestreaming the tournaments and having a reddit-orientated community holding various competitions on reddit regarding a certain topic such as:
The Best KO of the Week or The Best RuneWild GFX

Wilderness Events
Every 20 minutes Vorkath and a Treasure chest will be spawned deep in the wilderness, both rewarding you with great items.
Vorkath works exactly like Runescape and supports all attack types, be sure to use your magic protection prayer and antifire potion.

Quick Gear system
A quick gear system which can be opened by clicking F12, it's able to save and load your inventory, levels, spellbook and rune pouch. You are able to make a preset within 2 clicks, same goes for loading which is basically two buttons being, F12 -> F1 to load the melee slot.

Achievements system
An achievement system has been added which consists of three tabs, daily, weekly and life-time achievements, those achievements include PvM, PK, skill tasks which are mostly wilderness orientated.

The permanent achievements has a star system where it can be completed multiple times increasing the difficulty each time until you reach a gold star.
The rewards get multiplied twice each time where the silver one will give you twice the better reward and a gold star a 4x better reward.

Using your mail to login and recovery system through the client

During a Mage Bank event

The wilderness event: Treasure chest, an event that occurs every 20 minute. 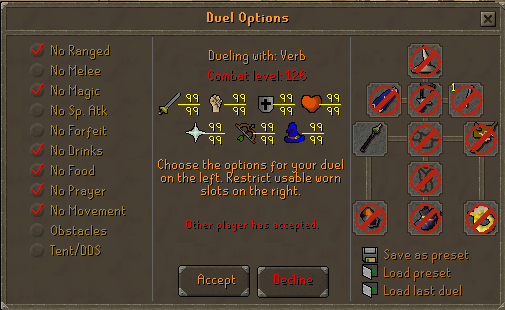 The duel interface of RuneWild with all options working

Staking, flowerpoker and dicing is fully automatic to prevent scammers.

Catacombs with a great hourly profit

Small but an important feature for the PKers, the royal seed pod

Newcomers receiving certain rewards for a certain amount of time.